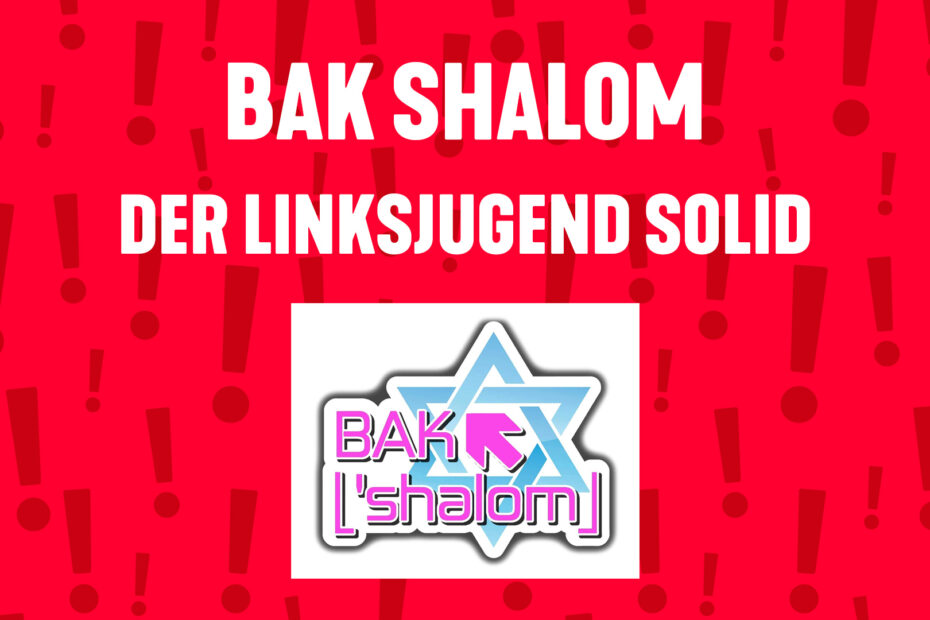 THE DECLARATION OF PRINCIPLES OF BAK SHALOM*

The establishment of a working group against antisemitism, anti-Zionism, anti-Americanism and regressive anti-Capitalism within Linksjugend [‘solid] has been long overdue. The German left has never considered these issues a central part of their social criticism. Developments in recent years – especially after the Islamist attacks in New York City and Washington DC on 9/11 – have shown the importance of dealing with these issues. Unfortunately, the political left has never been immune to regressive thinking.

Across German society, there is an alarmingly high percentage of antisemitic attitudes in all political wings and in middle of society. The ideology of antisemitism is based on a capitalist structured society. It provides ideological explanation with simple answers. The complex and abstract capitalist relations are personified and identified as Jews, who are responsible for the upheavals of modern society.

During recent political and economic discussions, the personification became apparent in campaigns against so-called “locusts”. This was the expression for the left and trade unions to rant against financial capital. This argumentation ignores the totality of capitalist socialization and tears up the relation between production and circulation sphere.

Today antisemitism isn’t manifested in classical forms. The mass homicide of European Jews has led to a shift of antisemitic sentiments. The new form of “secondary antisemitism” appears in anti-Zionism.

Israel is acting as the “Jew among the nations” (Léon Poliakov). Thus, in a Europe-wide survey in 2003, 59% respondents referred to Israel as the biggest threat to world peace.

We don’t need to emphasise that it is not our intention to call any criticism of Israel antisemitic. This accusation ignores the fact that criticism of Israel is pretty popular in German society and has never been taboo, neither in GDR nor in West Germany. Nevertheless, demanding a right to criticise Israel is often staged as breaking of a taboo. Very often, this criticism has antisemitic attitudes, as cases of German politicians like Möllemann and Hohmann has shown.

Israel as the nation for all Jews to live is the consequence of Auschwitz and other extermination camps. A Jewish nation as the fortress against antisemitism has become necessary due to the transformation of modern society into barbarism, as Nazi Germany has shown. For this reason we stand in solidarity with Israel, which includes solidarity with defence measures of any kind.

The German left won’t solve the Middle East conflict. On that account we don’t develop and discuss any concrete proposals for peace in the Middle East.

The long-term goal is acceptable peace to both sides. However, we do not blame Israel for the standstill in the peace process. There is no chance for progress as long as the Palestinian government is formed by organisations with antisemitic ideology and the claim to eliminate Israel. Hamas has an antisemitic charter calling for destructive hate of Jews. Such organisations are no positive reference to progressive positions in the political left.

Therefore, we strongly condemn recent attempts by some MPs and officials of the party Die Linke to invite Hamas as partner in dialogue. Ignoring Hamas’ reactionary ideology and that of other organisations like Hezbollah has to be criticised.

We also condemn a huge part of the left’s silence regarding the threat to Israel by the regime in Iran. The Iranian president Ahmadinedshad is an antisemite who wants to destroy Israel. With his support, conferences have been conducted with Holocaust deniers in Tehran. Gays and lesbians are subject to the terrorism of the Islamic police and are hanged or stoned for their way of life.

We argue for fundamental change in the conditions in these societies, especially for the sake of the people in the Middle East. There is no alternative to democratisation and liberalisation. The task of the left is to support emancipatory movements such as the women’s and student’s movement in Arab and Islamic countries.

Unfortunately, the left often defends reactionary regimes instead of criticizing them. Behind this attitude is an outdated anti-imperialism, which is characterized by Manichaean thinking. An uncompromising rejection of anti-imperialism is necessary for the new constitution of emancipatory social criticism.

The core of this anti-imperialist attitude is the hatred against the United States of America. The US is regarded as the source of all evil, which is dominated by Jews. This picture is open antisemitism.
Historically, anti-Americanism has been typical of conservatives, particularly those on the extreme right in Germany. The political left had either a positive picture of America (like the revolutionaries of 1848) or at least an ambivalent position. This changed in the 20th century at the beginning of the Cold War, which ended with the collapse of the Soviet Union. Today the majority of America’s enemies are no longer national liberation movements pursuing progressive goals. Instead they are anti-modern, misogynistic and antisemitic movements, such as movements of political Islam.

Thus it is why German Nazis cheered the attacks on 9/11 in the US. No one is surprised by their solidarity with Palestinians and their hatred against Israel. It is no surprise that we see Palestinian keffiyehs more often on Nazi demonstrations than on anti-fascist demonstrations. The Nazi campaign against liberal capitalism, financial capital and globalization is part of the same ideology.

We have to realize that not every kind of criticism of bourgeois society is progressive. Ultra nationalist and racist positions have to be rejected consistently. All steps towards co-operation between forces of reaction and the left need to be combated.

An emancipatory position is not the apology of bourgeois society, nor the conceptional negation. Mindful of the inherent dialectic, it is about the preservation of the achievements of civil society such as individual liberties, which are necessarily the basis for progress.

The purpose of BAK Shalom is the fundamental discussion about progressive social criticism and the unsparing criticism of antisemitism, anti-Zionism, anti-Americanism and regressive anti-capitalism within the party Die Linke.

BAK Shalom: Shalom is the Hebrew term for peace, BAK (Bundesarbeitskreis) is the German abbreviation for federal work group.